Posted on January 27, 2014 by avatarsofsteel

The games I played last year had a lot to put up with.  A moving user, patchy internet, computer crashed by some other game – but some survived! I did play some games 🙂  So here is a tribute to the toughest of the tough, the survivors, the travellers, the movers and shakers – the comfort zones that came through it all.

Top prize for sheer reliability throughout goes to EQ2. This just worked, no matter where I was or what I was doing, as long as the internet permitted. And it’s a nice, calming game. Much appreciated, good enough for a 6 month sub, steady as an oak! Late last year we got shiny new high level characters to try out and keep too. My highest self-played alt is somewhere in it’s 40s (I don’t care much about progress these days), and I wouldn’t otherwise have been able to see life at the top for a good long while (if ever). Amongst other things, my new high level person can earn the lucre for a slightly fancier house – so here it is. My real house has this kind of feel to it now that it’s had a makeover, so this is a good picture to put here. I’m also feeling very protective about EQ2, for the Massacre of the Siblings has begun over at SOE now that they want us all only spending on EQNext/Landmark – Vanguard, Free Realms, Wizardry Online, Clone Wars, we are told, are to be shut. Oh 😦 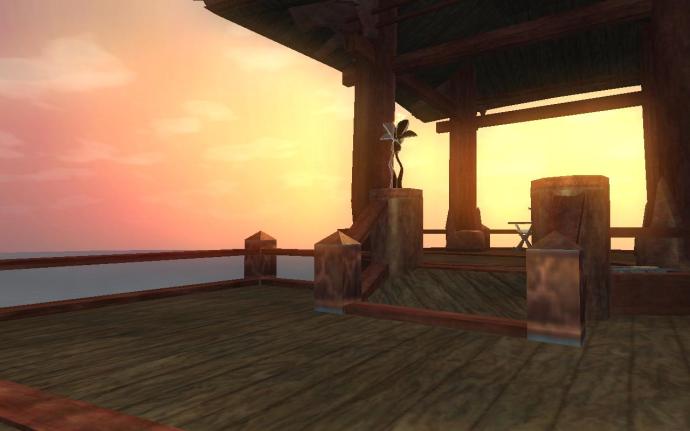 I gotta new home in EQ2! (But how long will it survive SOE?)

Vanguard is a game I love though. It did crash my computer while I was away, causing all kinds of fankles and extra expense, so I know all is not well with it. I’ll try to be there for the sunset, which means fully backing up everything every time I want to play it. I’ll try to get OBS working (another crash risk). I’ll try to keep some record of the fun I had playing it. But it’s not good enough really. Here we are watching a new cultural form grow, one which draws in so many artists, programmers and thinkers that they can be wastefully overworked and laid off with no risk to the studio, and nobody keeps the iconic games of our era going.

But there’s more too it than just the cultural aspect. People get very attached to their pixels, and their virtual environments – ie – there is a market. This is something studios, or rather big studios ignore/don’t realise/don’t want to know. Yet for old games the assets are there, the code is there – the giant bulk of the work is done. You may need someone to curate your sunset game, or keep it running – but that’s about it. The cost-profit ratio for a sunset game is potentially far, far better than for a new and shiny one.  This would involve losing the beloved sub, I should think, but fluffy cash shop items ought to do well, or box sales. Oh well, all in all I find the way games are sunsetted profoundly wasteful as well as deeply unpleasant. From a selfish point of view, I most prefer if they go open source, allowing would-be’s to look at and learn from the code, allowing fans to keep them going, allowing them to be preserved for the future and possibly even built on. A couple I know of have taken this route, and I’m deeply grateful and impressed – Glitch and Ryzom spring to mind (if you know any others I’d be interested)

And then theres putting it in maintenance mode:

Arenanet hehehe :). Well, pleased to report that the game I played next most is GW1. (It doesn’t have housing so EQ2 got played more). On a micro-scale putting GW1 into maintenance mode has worked out well for Arenanet – our house now owns 2 copies of GW2, and 2 of GW1. I’m happy to buy more as well. It’s a nuisance when someone wants to play and we don’t have spares. And it will probably be GW1 that I buy extra of simply because GW2 doesn’t run well on all our machines, and we are sociable gamers. I would love to see more items in the shop in GW1. Seriously. It’s still a very firm favourite. During the upheavals I actually played it enough to get to Lion’s Arch (woohoo?) !!

But news on GW2 as well, once we moved back in here, to my surprise I found that the performance has improved enough for me to play it longer than a half hour without logging out on my laptop. I have barely started, nothing to write, but it’s why I bought the second copy of that. . And the same goes for LotRO which has stopped doing the foxtrot and now…runs 🙂 I have always loved the beautiful, beautiful scenery in LotRo and did used to log in, just for 5 minutes now and again to enjoy being there. Again haven’t had time to really get going, but very glad to have a whole new game to play. New to me anyway.

At first Wurm was there too. And lovely to be able to play that while my real little world was upside down. But after the crash that horrible ui flicker returned. I had the computer reformatted by a professional, and then redid it myself a few months later. The flickering stayed. This time I decided to find out what it was, and I did – or at least I found out how to fix it. But had to wait until I was back here with reliable internet to do the laborious process of elimination needed. Oh yes, forgot to say – enabling Windows Aero in the desktop stopped the flickering in the Wurm ui. It’s playable again, I’m back, and I’m catching up. Not marvellous, servers very uppy downy ever since that DDOS attack (doubt there’s a link though), GLSL shaders haven’t worked since Wurm 1 (more than a year now), (my water graphic is barely visible at the moment). For the elevated price… mmmm. But it’s the best virtual world so far, so I’m still there.

Another disappointment is Neverwinter. It’s an action game, there’s no point playing when performance is rubbish. Performance was ok when it started, but has gone steadily downhill since, so I’ve stopped playing it. I also tried out Jade Dynasty – and was having fun too, but there was an update or an expansion or something, and now the graphics are borked, so that one didn’t make it either.

Last but definitely not least I played Path of Exile a lot, a lot :). It’s that game with the truly magnificent talent tree. For an isometric game the terrain graphics are nice too, with firelight, waves in the ocean etc. Characters tend to run around in rags though. Well mine did anyway. Totally recommend for hopping on & having an hours’ fun. Love the donate voluntarily for fluff items or just-to-show-off-that-you-did system of payment (fascinating!). And the procedurally generated maps work well. It’s that wonderful thing – “just fun!” to play. (Yay for fun.)

So for having not played much, I played a fair bit, albeit this is over a few months. Now I have a tablet. And I want to write about that. Also just about all the stuff going on. Also.. yes. Think I’ve got something of a backed-up blogpipe here  🙂

Posted on January 2, 2014 by avatarsofsteel

I like new years – heck I like new days. Well now I do like new days. Used to be a time I’d be alarmed up, wack on the radio, grab something hot and stimulating and rush about like a punch-drunk hen and somehow end up where I was supposed to be albeit disorientated and groggy. But I sat up bolt-upright with a pounding heart and sweaty armpits once too often and it occurred to me that it was all rather nasty. Fight/flight mode is a horrible way to wake up. That was ages ago though, and not subject to any New Year’s resolutions this year as it is already sorted. (I discovered the joys of waking early and now it’s more “wake up and relax” then meander off to deal with things, much nicer. And no radio.)

I have a whole routine to waking up now, and very enjoyable it is – should write it up sometime. Can’t tackle a New Year quite the same way though, but there is that same sense of turning the page and starting afresh. It’s nice. So today is the day after New Year and I have a little time to blog. I prefer reading resolutions, but haven’t seen many – yet. Maybe other people are also only just getting to it?

A New Year definitely deserves a better plan. Either a new plan or a good rethink of the old one. My Graet Declutter is a longer-than-years thing but since the vast bulk of it is now done, I do need new plans for what remains. Code/hobby gets a review and improve,  Life! Life gets a few resolutions thrown at it 🙂 Here they are:

Spend as much time as possible with the next generation

Enjoy and treasure each day 🙂

Not to play games that irritate me

Find yet more ways not to give money to horrible people (which has turned out to be more enjoyable than expected.)

I better not put more than that, it’s enough to be doing with. Chores and duties don’t get a look-in on my list, not only because I’m fairly disciplined but also because I see no reason to glorify them – stuff you are forced to do is pants, on the whole.  I also got no hopes for the world this year, it seems even more confused and bamboozled than usual. Life isn’t widely celebrated and valued out there alas, but life, for itself, is celebrated here in my home and always will be. So here’s a toast to the good things in life, and may you have all of them!