I enjoy playing this person! (EQ2)

Posted on August 4, 2013 by avatarsofsteel

Was thinking about avatar appearance and how it affects gameplay.  The Big Girl in EQ2 unfailingly fires my imagination. She’s normally very shy, but I paparazzed her just before a fight and managed to get a rare screenshot of her face.  Even when she’s hiding in a helmet though, there’s a definite sense of unique character and I can easily add to her story when I play 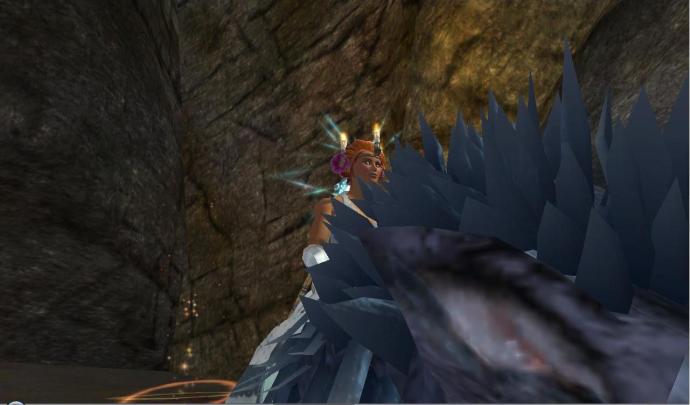 so it isn’t all in the face. It’s the body, and the armour, the warhog – and the roughness of the graphics. I know this lady is going to be handy to have around in a battle and won’t be obsessing about her mascara running. And there’s that feeling of uniqueness – there are enough factors to her appearance that there’s unlikely to be too many of her running about. Together it all makes it really easy to pretend to be her character.

I do find the image below bland in comparison. It has a sort of Teflon effect on my imagination.  If looking cute under all possible circumstances even when gurning was relevant to the gameplay or story, I might feel different? Well actually, I’m not sure if that’s it. I’m not repelled or anything, just indifferent. Strange. Is it the cell shading? Maybe because I associate that with two dimensions and flat things that you can only look at but not interact with? Perhaps it’s the lack of detail in the clothes? This is kind of bugging me now.  I have no doubt I will get used to this style and it’s not a gamebreaker for me, but I’d love to know what triggers this disconnect.

2 thoughts on “I enjoy playing this person! (EQ2)”