(Started- 2 May, updating through the month and leaving sticky for May)

…And there I was casting around for something to do on here! It’s around a year since the redoubtable Syp from Biobreak set up the Newbie Blogger Initiative, and it was a good, good thing.

It is alas no more at time of writing, but many of us have fond memories – good excuse for a party say I. So, I’ll collate anything I spot written about it recently here, and also, if you’ve started a new blog since the original NBI, or are just starting one now, do put an url and short description in my comments. I’m only a little humble blogger, but some bigger bloggers sometimes stop by and that way we’ll have a few new newbies to cherish this year too 🙂

To start the ball rolling here are three blogs that are also remembering that wonderful initiative – in fact they prompted this post:

9 May update: Wilhelm Arcturus has done a very thorough and cogent analysis of NBI 12 months on – http://tagn.wordpress.com/2013/05/09/new-blogger-initiative-a-year-later-who-survived/#comment-82095
plus he has a talent for making the raw numbers interesting, lucky person 🙂

11 May: Heyyy!, Ravalation has a post out: http://ravalation.blogspot.co.uk/2013/05/nbi-one-year-and-week-later.html – (ha!)(ha! as in just what was needed – an old new blogger, blogging a year on)  and sent us this pic too. This post is getting festiver and festiver! Thank you!

and look what Italic Pig sent moi. Italic Pig’s first blog post reads at December 2012 which makes it a new blog then, (love to be able to publicise more new blogs, hint, hint)  http://italicpig.com/blog/. It is a nice blog, a devblog with a science bent and I’m happy to give it some air here 🙂 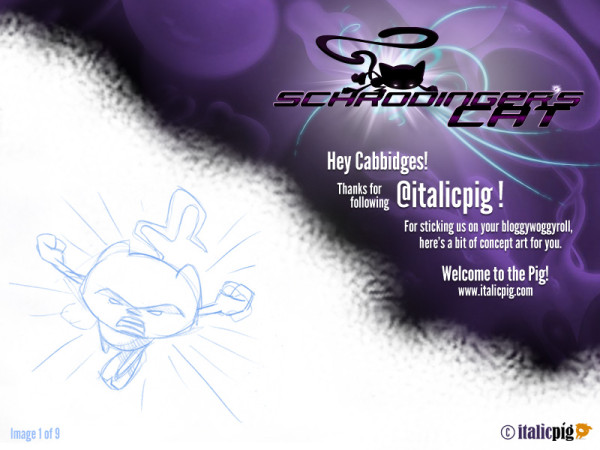 Had a little break from the blog to do some otherstuff and now it’s 16 May, two more related posts!

http://stnylan.wordpress.com/2013/05/13/personal-blogiversary/ Another new blogger still going strong – this is so nice to see, I’m really glad it worked out. Stnylan’s posts cover quite a few subjects there (must have a read).

And MMO meltingpot has marked the occasion too!: http://www.mmomeltingpot.com/2013/05/the-new-bloggers-initiative-a-startling-success/

17 May and A High Latency life has written http://highlatencylife.com/2013/05/17/i-feel-old/, which gives us some intriguing morsels of context and history for our lovely 2012 NBI

Maybe we could do something every year? I’m not sure. I’ll leave such mighty decisions to Syp himself and the blogcommunity I think. But I don’t want the occasion to pass unmarked. And I definitely want to do my bitty to get others started or help them on their way. So if you’re starting out, don’t be shy!

Some posts that I still remember:  Many of the older bloggers did advice posts (mine was “Curling up with a good bloog” it’s in here somewhere (and no it wasn’t a spelling mistake but  I know people pointed it out from kindness, so I like them, mwah!)). Some of the advice posts I read then, since I wasn’t a very old blogger, stuck out in my mind and I’m busy tracking them down. Here’s one:

http://bhagpuss.blogspot.co.uk/2012/05/take-moment-nbi.html
the points about time management struck me at the time. I don’t spend as long over my posts as some people (just bat them out at a furious speed) – still. It does take time, and it’s worth figuring out how to fit blogging in amongst all the other joys of life.

And this one ha! glad I found it: http://toomanyannas.com/feature/names-dont-fence-me-in/ about picking a name in such a way that it doesn’t become troublesome, an important but easily forgotten detail.

There was another one… Yep, got it:

http://tishtoshtesh.wordpress.com/2012/05/09/nbi-for-love-or-money/ – that one’s really interesting. I don’t agree full-on because I try to keep all the parts of my life working together like a well oiled machinie, rather than partition things. So if an activity blurs into a worky thing I don’t mind. But nonetheless making a chore out of a pleasure is a silly thing to do. People do this in games all the time too, which mystifies me. People are… strange… (or it could be me…).