Posted on February 17, 2013 by avatarsofsteel

Not been writing much about PlanetGardenShed because relearning languages doesn’t lend itself to storytelling much – ya just do it really, and that’s mainly what I’ve been doing. Python and C++ for now. There will be more because I’m curious and also because though I can’t multitask for peanuts irl, I don’t seem to have a problem keeping several languages/interpreters earthly or computer in my head. Swings and roundabouts. Just don’t ask me to walk and talk at the same time haha – disaster. Walk, talk and eat? Food splatter and probs get run over by bus.

Aside from some heavy but dry learning, though, I’ve been digging into stopping the Hobo dropping through the terrain – boils down to the beginner scripts used in tutorials really which teach you to move things in a very basic way. If you tell a thing to move to x,y,z co-ordinates it’s going to do just that regardless. It will merrily go through unhorizontal things,  into space – so it falls. That kind of basic movement is fine on a flat plane where both y’s (ground and object) are safely = and your Hobo will not therefore be able to break through.

There are more advanced ways of moving things (setlinearvelocity and more) which is what I’ll be looking at next, another whole wee world there. And I’m not sure just where when and how (in the script) an object figures out if it’s going to hit anything and reacts, overriding those x,y,z co-ordinate (increments usually) you fed in – that’s a whole missing piece of information. …I’m gabbling. Anyway, detective work ahoy!

Which I shall duly enjoy. Finding that all that out led me to an interesting blog, and I wanted to put a link. This link is to a better method of making the python scripts, I think (and takes a little more effort to set up). I haven’t tried it – I just found this link, but that’s what I’ll be exploring next when I need a break from the duller stuff.

and just because I happen to like the look of my faceted in-development terrain, here’s the stage I use to mess about with scripting, in all it’s sort-of metallic stripped downness. I’m just putting the pics bercos I like ’em – it’s the same old terrain by the way, it is easier to compare results that way. I do many things to it as I go – just imagine what that poor wooze has in store !! 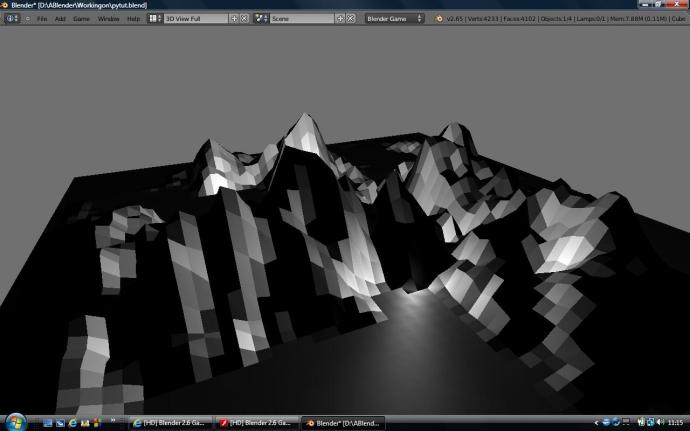