Celebration its called, and I will most certainly be going to have a look when I can for short bursts throughout the day!

Meanwhile on the home front: 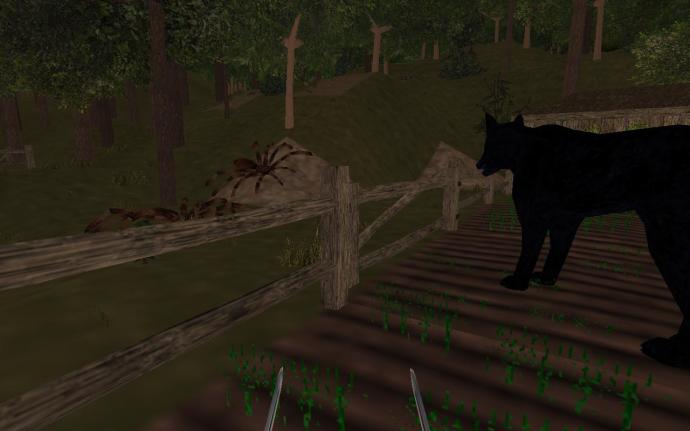 So….  can’t get out much these days at the deed above, though the hellcreatures make a very pretty lightshow at night. So…. hmmm…. stay home and sew or go and sail the oceans deep? Explore a whole new server or… sew…. which shall it be I wonder…

I think I’ll pack a few sprouts and the spare settlement deed and go look. It’ll be bald, right? New servers are always bald. My village alt on Exo is conveniently close and the willage ships are fine fine ships. Besides what nicer than to go on a voyage of discovery with such a fine fine crew as the willagers will be. Bye spidies I go feed doggies and pack!

in this foul weather

Being a survival game in a persistant, self sustaining wilderness is a key concept of Wurm Online, and I welcome anything that keeps that concept alive.  It’s amazingly unusual. Another and perhaps even more key concept is a pvp one – which I’m pretty sure is what the crafting and building and terraforming are meant to support. Building forts and settlements for other players to come and besiege and plunder – then you go and attack theirs. That’s got a ways to go before it works but its still a good notion, and I can well see why it’s where a lot of the game development lies. It would intrigue me too.

Combined, these concepts have tended to result in urbanisation though, with traders wanting people to be all close together for convenience, and fighters likewise. Convenience is no small thing in a game where it takes hours to travel. But urban, Wurm becomes very ordinary. Popcorn though, for the backlash as the population is spread more thinly and the traders lose out. But personally I’m happy – the more open areas and wilderness, the less simsy and farmvilley it is. Now if we could just curb the endless pointless repetitive clicking for it’s own sake. Endless pointful clicking I can handle, sort of. Well… sort of…. meh…

Servers were briefly down for maintenance – up now again. As well as the new servers, I believe we are getting some kind of achievement system and one other thing which is a very unique feature – a phobias button! An option to tone down the spiders which some people cannot cope with. I believe they will be seen as some kind of blob. Though I do like Wox’ solution for digital spider phobia which is here: http://dl.dropbox.com/u/38283941/Wurm/Animals/flower_spider.jpg

I personally am doing my little preparations for going to see the new land – stowing my one and only good tool – a mining pick –  and digging out/making a spare for my exo alt who will go with her village. Picking some sprouts, lightening the inventory to basics, all that stuff. It’s an adventure, a voyage of discovery. For the next few hours we will be provisioning our ship and making sure she is seaworthy, choosing our fellow travellers and speculating on what might await us in this new, mysterious place. An epic story shall emerge for our village. We shall build memories.

Also, I am making a fresh alt who will start with the server. It’s a tradition with me. Opportunities to take a fresh alt into a fresh world are wonderful and to be savoured. They deserve a new person, with a new outlook. (plus it’s a brilliant solo experience – usually a ton of nasty mobs and no infrastructure or trees. I will die! I will die! Hahahaha!)

Wall, I got killed by a crocodile while waiting for our boat crew to arrive – so I’ve made a good start 🙂 and am presently in the middle of the corpse run. I will relog unarmed in the desert, with a crocodile nearby… oooo 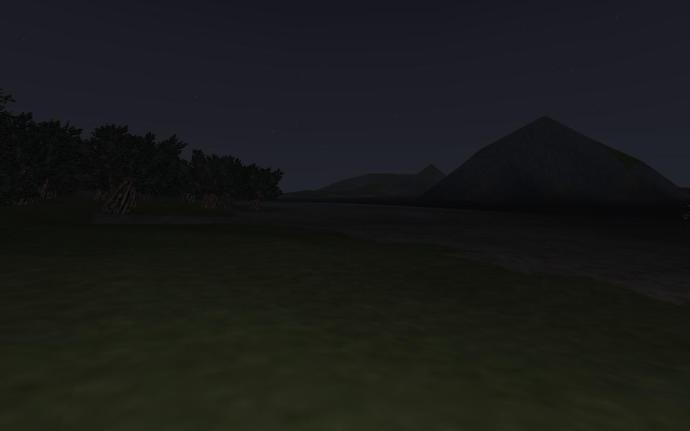 courtesy of the fresh alt. Servers down again to sort out a chat problem – from what I saw though, its very pretty. Clay near the spawn which is as usual near a lake. Hills in the distance – will have to walk for iron I think, but I only saw a little and then Exodus came up and I went back to the main adventure to retrieve my corpse (done) and get back to waiting for the crew who were busy putting everything and kitchen sink into the sailboat. You have no idea how much stuff they managed to get into that thing.

We had a blissfully uneventful server crossing and sailed around the map delighted by the topography, hopping off now and again to prospect and explore. It’s a lovely map with sweeping mountains, and interesting gullies – and not too bald at all. The ore is localised again which isn’t my favourite way of doing it but it’s not really a problem to me personally as I know enough people ingame to be able to access anything I need. For beginners and new premiums though – well Wurm is just plain harsh on beginners and that’s a fact. Unless you go ezmode and join a village, but even then tis hard to pick a good one when you know nobody and don’t know what you’re doing. Still a portion of people do survive.

After the first pass we had a good idea of which parts we found interesting and returned to have a second look. This all took a loooongggg time of course, but we had a fair bit of fun. Four slightly deranged people stuffed in a small rowing boat with every possible thing they could need tend to do that. Well, to be accurate 3 slightly deranged ones and Reflexx. I didn’t see anything that took my fancy, but did decide to lose another deed, so will only have 3. Hunting, forge and skiller, all very small. Or four if I decide to throw in my lot here – which I probably will. I took very few pictures – we needed our eyes for tar, clay, bits of land we liked the look of, bears in the water. But there was one sight I’ll never forget ever, and I’ll post a picture at the end. (Writing this waiting for servers to come up the next day but don’t know when I’ll finish.)

After the second pass we took a vote and went to place our deed. I was promptly killed by something – bear I think it was. Oh well… :). I had more fight than sense in me yesterday. The mayor kindly rescued me from spawn and then, things being as they are, fell in love with a completely different mountain and asked me to deed that for him temporarily. So there we are, that’s this post up to date! I am (presently) alive and well on Celebration, and enjoying all the new deed kerfuffle. I have an alt at spawn to explore and solo on my own and I’ll probably not go there much exept to solo right at the very beginning now while all the dragonkilling happens. While I’ll happily popcorn as people who want all of Wurm to be the Burbs squeak about a new server, I find the drama that goes with the killing of uniques distasteful and unpleasant. Real money is involved and feelings run not only high but way beyond fun and it’s all pretty petty and low-life.  I shall be leaving every one who cares to participate to it and will reappear when it’s done with barring odd circumstances (it just occured to me that I should know Wurm better than to set out an absolute course of action). Also for the first and probably only time I got to see this. In the very best tradition of indistinct wildlife photography I give you:

and that is  how I want to remember the Dragons of Celebration.

This kind of thing is going on too

chez nous, plus decluttering and boxing up belongings. After a particularly silly, people-running-around-mad start, the year is shaping up.

Moderation impinges on freedom of speech – I hear it from every swearing 12 year old and older. Yere. Actually. Freedom of speech and censorship are as neutral as gravity.

It’s what you do with them that causes consequences which can be judged good or bad by varied criteria. Isn’t tricky at all.  Putting your critics in jail is unwise use of censorship. Yelling in my ear is unwise use of freedom of speech. Both examples have bad consequences, in different ways. And it’s best not to jump of tall buildings.

Something of a catch up day for all of us. Gz Tokeri on the body control – x  and hug! And here’s today’s pics: 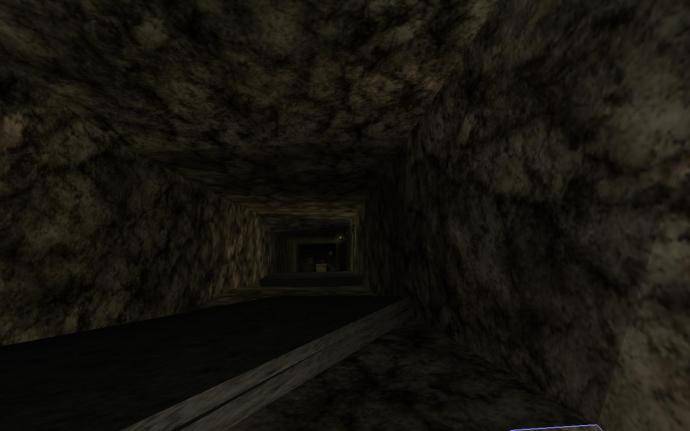 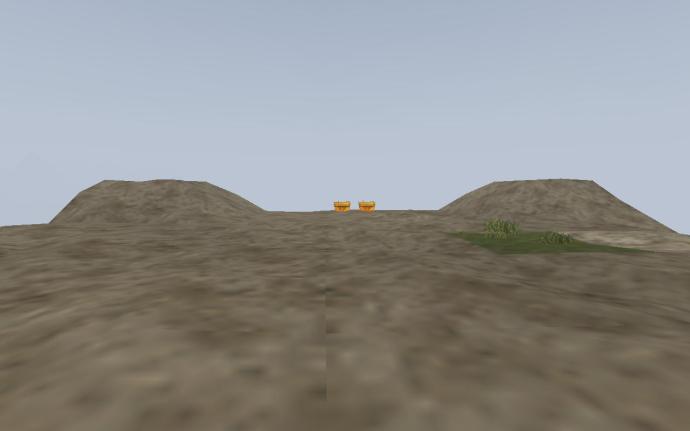 and the priests are moving in I see …peculiar people…

Update: … and then Celebration opened and we all sailed off – and eventually parted company, though I still see Reflexx often.

Woopsie didn’t check the specs and I won’t be able to run it. It doesn’t have magnificent graphics so I have no idea what the excuse is. Will shove in coffin & keep for whenever I decide to upgrade – by which time there will be better things to play. Ciao Diablo.

This is my village home on Exodus

It has indoor plumbing! 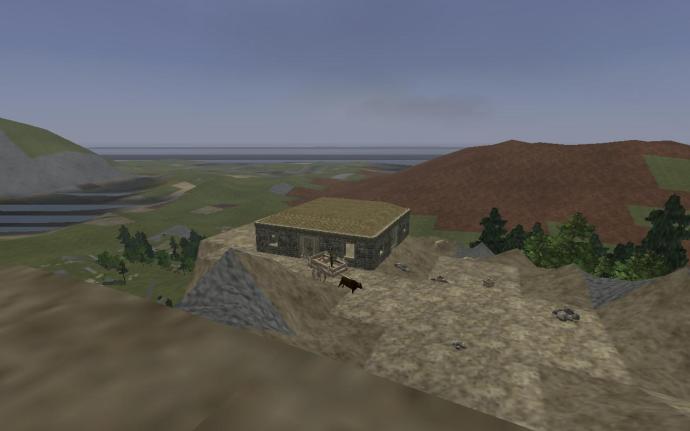 Reflexx moves into his home

These are from last thing last night – we’re almost up to date.

Things are progressing nicely here too

A view of the viewing platform

It’s really amazing to watch Quiglen work and help. Reflexx, our villager, made a sailboat while all this was going on too. Tokeri the neighbour turned up with 600 dirts – there was much, much digging! All this completed on the second day – we are no slouches, and the boss works like a machine. 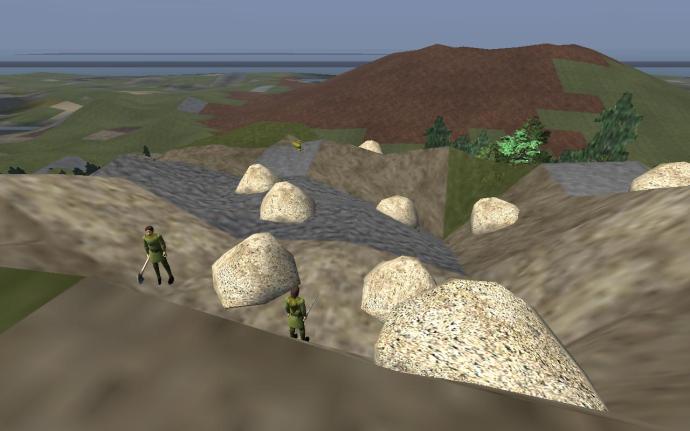 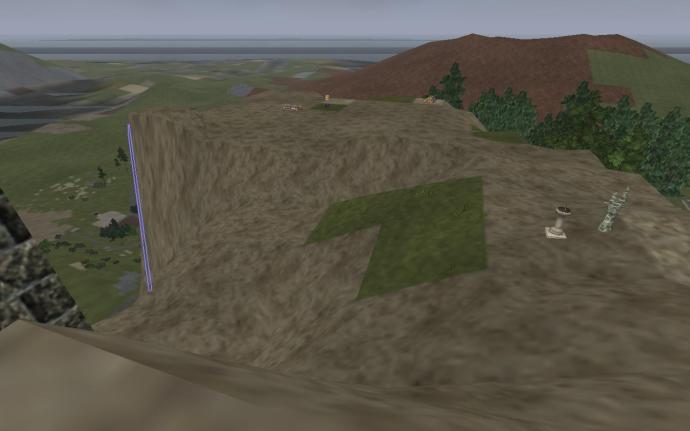 You have to be a player to appreciate that blue line

Deed in the making (Wurm Online)

The picture I posted in my last post is the beginning of a deed – I’m a villager there. Thought it be nice to document it as it grows. The boss is a master at what he does…some 12 hours later….